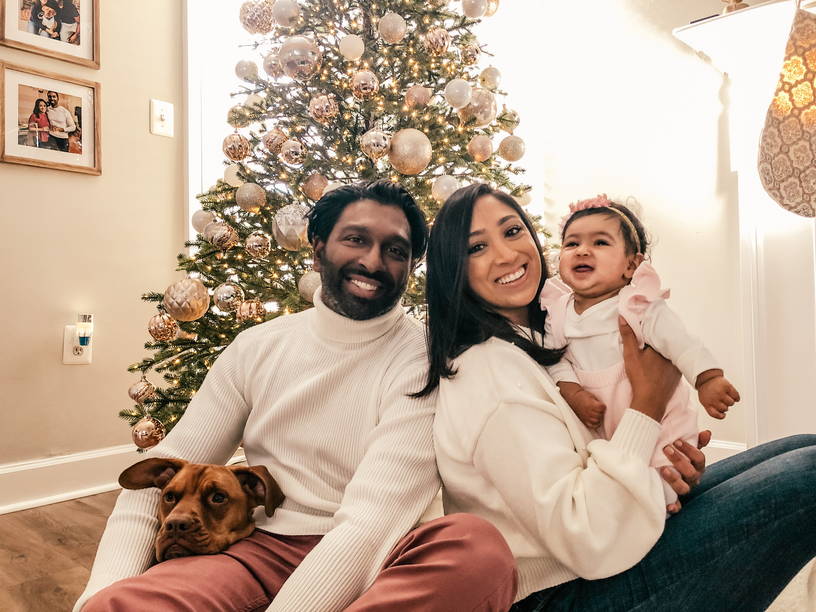 My husband and I started trying to get pregnant August 2016.  I was 31. It was all planned out.  I’d get pregnant, have the baby in April or May 2017 and get to stay home through the summer as a teacher.  August of 2017 came, but no baby.  Just negative pregnancy tests and more trips to the store for tampons.

We got tested at a popular fertility clinic in our area, and it turned out that I had low AMH, which basically is low egg count for my given age.  I was 32.  The doctor suggested we start fertility treatments right away as time wasn’t on my side. Her words. I was lucky that my insurance covered a great amount of fertility treatments, but they required me to do 6 rounds of IUI prior to providing IVF coverage. IUI is basically artificial insemination timed at the exact time that ovulation is expected after injections and monitoring the growth of follicles.  My first IUI was December 2017, and I remember not drinking at the New Years Eve party we went to off the chance that I may have been pregnant.  There was so much hope, even though a large part of me knew I needed a more aggressive treatment plan.  Round 1 of IUI didn’t work.  Negative pregnancy test – nothing I’d never seen before.

Round 2 of IUI included more injections.  Insemination date came and went and so did the negative pregnancy test.

Round 3 included daily injections with higher dosages.  We needed more follicles and larger follicles and what better way to achieve that other than pumping in more hormones?  This came with a bruised belly and side effects and hormones and emotions.  Still didn’t yield to a positive pregnancy test.

Round 6 – our last IUI round before we could do IVF, but my fuel tank was on E.  We begged the doctor to do a really light round. I couldn’t do more of the injections and the dosages and the side effects for something that wasn’t working. The doctor knew this round wasn’t going to work – IUI is more likely to work within the first 3 rounds.  Pregnancy test came, and you guessed it – negative.

Even though there was a pattern here, there was still so much hope.

Next was IVF, which was an exciting transition.  IVF is known to have a higher success rate over IUI, so there was no reason to think it wouldn’t work.  Because of this, IVF was full of way more hope and positivity than what IUI brought.  We started our IVF round, which included birth control pills ironically, high injection dosages, oral pills, vaginal suppositories – I joked that I was putting medicine in my body every which way that I could.  We got 14 eggs from my egg retrieval which resulted in 4 embryos.  4 potential little babies!  I was going to have a baby with one of these embryos – the stats pretty much guaranteed a pregnancy within the first 3 rounds of IVF.  It said I had a 90something percent chance!

Embryo transfer day was so exciting!  It was October 2018. I was 33 now. You see picture of the embryo being transferred inside of you, and you even get to watch the little embryo make it’s way to your uterus through a TV they have displayed for you.  You’re literally watching pregnancy occur in front of your very eyes.  From that day until pregnancy test day, my husband and I talked about the baby. We looked up the due date using an IVF calculator, we wondered if it was a boy or a girl, we were careful to hug gently to not disturb the baby.  The odds were in our favor, finally.

I was crushed.  Why wouldn’t this have worked?

We did the next embryo transfer as soon as it was medically possible.  Round 2 of IVF, round 7 of fertility treatments.  My pregnancy test was scheduled for December 10, but I couldn’t wait.  I took a test at home on December 9.  It was positive.

IT WAS POSITIVE!  I cried. I was in disbelief. It was finally over, and I remember saying that. I think those were some of the first words out of my mouth – “it’s over”.  After 2 and a half years, I was going to have a baby on August 14, 2019.

Not so fast.  The baby’s heartbeat at the 6 week check up wasn’t as high as it should have been.  It was beating at 87 beats per minute.  The doctor scheduled another ultrasound for week 7.  That week was hell.  Is the baby okay? What did this mean?  We went back for the week 7 ultrasound and thankfully, the baby’s heartrate had jumped to 157, which was perfect!  Oh I couldn’t have remembered feeling more relieved than that moment.  I finally was ready to graduate from the fertility clinic and see my OBGYN.  What a bittersweet moment.

I scheduled an appointment with my OBGYN when I was 9 weeks pregnant. We were going to hear the baby’s heartbeat at this appointment.  I couldn’t believe my baby had a heart beat that was going to have sound to it now!  After a physical exam, the doctor finally was ready to show us our little one.  Except there wasn’t really anything to show.  There definitely wasn’t anything to listen to.  Our baby no longer had a heartbeat.

Miscarriage has been the most difficult thing I’ve ever faced in my life to this day.

It still gives me goosebumps to remember how I felt during and after my miscarriage.  The grieving process was lengthy, and I think for me, a lot of the sadness came from how unfair it was.  Miscarriage is always unfair, but in my case it felt unfair because it took so long to finally even get pregnant. How unfair was it that I had to lose a baby too?  Would I ever even get pregnant again?

We did the next embryo transfer, and hope was renewed because the embryo was actually hatching during transfer! This was a great sign.  This meant it was completely ready to implant.

My pregnancy test was negative.

I had one embryo left.  All I needed was one embryo to make the one baby that I wanted.  It was fine.  But we found some polyps in my uterus and underwent surgery to remove them to create the most optimum environment for this last little embryo.

Finally, we transferred my last little cute embryo into my perfect uterus. But another negative pregnancy test.

I was completely broken.  I had gone through 6 rounds of IUI and 4 rounds of IVF.  I had been trying to have a baby for close to 3 years at this point and nothing to show for it.  There was definitely something wrong with me and we just didn’t know what it was.  Maybe I had endometriosis – so we did a biopsy which was oh so painful.  The results from that test came back negative, which was great but also so frustrating because what was the problem then? I just wanted some answers.

The only thing left to do was another egg retrieval, and I got 6 embryos this time!  But I didn’t have much left in me.  Doctors usually recommend only transferring one embryo at a time since carrying multiples poses many risks during pregnancy, but in this case, my doctor agreed that transferring two embryos would be okay since we had such a hard time even getting pregnant with one.  So IVF round 5 – 2 embryos – resulting in yet again another negative pregnancy test.

HOW? At this point, I was done.  I started grieving; legitimately grieving this loss of a dream that I’d ever become pregnant and have a family in the traditional sense.  My husband and I talked about the other options – would we consider surrogacy? Adoption? Egg donors? Embryo donors? Sperm donors? No kids?

I told my doctor that I had no hope left and I was trying to make it clear to her, in the nicest way possible, that I wasn’t interested in putting myself and my body and my mind through another IVF round.  I wanted my life back and I wanted to move on.  She suggested another round with two more embryos – I reluctantly agreed, and told her to set up the date as soon as she could so I could get it over with.

It was October 2019. I went to the next embryo transfer crying.  I was dreading it.  Embryo transfer days were usually filled with so much hope, but not this time.  This time was filled with sadness.  I cried during the actual transfer.  I didn’t even look at the picture of the embryos on the screen.  I had no connection to them. Why bother.

I took another test the following day.  Was it positive? It was positive.  Was it? Was this batch of tests faulty? I told my husband a few hours later, but told him the test was probably wrong.  I took another test the following morning.  It showed positive again, but there’s no way it could have been.  I told my husband we’d need to use his urine as the control group.  This batch of tests was faulty, right?

He took a pregnancy test right away.  His was negative.

Having a baby dims the pain that came with infertility, but it doesn’t erase it.

Now that I have Myla, I can certainly say everything was worth it.  Every needle, every appointment, every surgery – even the miscarriage.  If I had to go through all of it again, I would if it meant I got Myla. My blood levels showed elevated levels of HCG which is the pregnancy hormone, which is typically common in a multiple pregnancy.  Could I be pregnant with both embryos?? Were we going to have twins??  A couple days later, the bleeding began.  The clots were the size of golf balls. I couldn’t believe it.  I couldn’t believe this could happen again, but then again, I could.  I went directly into the fertility clinic because I needed an ultrasound just to confirm the loss.

There was a yolk sac. And there was an embryo.  Just one. I was still pregnant.

I was finally pregnant, and I was having a healthy pregnancy.

I had always wanted a girl, and I always wanted to name her Myla.  I had Myla on June 29, 2020.  Myla means soldier – how fitting.  I gave her the middle name Asha, which means hope.  How very, very fitting.

Having a baby dims the pain that came with infertility, but it doesn’t erase it.  Now that I have Myla, I can certainly say everything was worth it.  Every needle, every appointment, every surgery – even the miscarriage.  If I had to go through all of it again, I would if it meant I got Myla. I would do it all over again, double the time, double the hormones, double the pain.  Had I given up like I wanted to, I would have never had Myla.

Myla was worth this entire story.  Plain and simple. 1 miscarriage, 1 live birth. I was 35 years when I conceived my daughter via IVF.

There was no known cause.

It was probably chromosomal abnormalities.

Find support! Whether it’s a friend or a strangers via an online forum, this is a difficult time to be alone.   It is already such an isolating time.