Miscarriage Success Story: Struggles with TTC, Miscarriage & Misoprostol + A Journey of Self Love

My husband and I started trying to conceive on our honeymoon, so back in October of 2016.  I knew something wasn’t working properly in my body because I couldn’t seem to get a positive ovulation test and I had missed my period for three months.  Between wedding activities, my grandfather dying of cancer, and working in a job that I hated, my body had been going through a lot.

I was very fortunate to have an OB/GYN who was willing to run hormonal tests on me before making me try for 12 months first. He trusted that I knew something was off.  In March of 2017 I was able to start monitored cycles with letrozole and the trigger shot.  We did a couple cycles with medication, but my body didn’t really respond to the meds until we increased my dosage.  In July of 2017 and on our fourth medicated cycle, I found out I was pregnant.  I finally saw those two pink lines I had convinced myself I would never be able to see.

I felt okay for the first few weeks of my pregnancy.  My levels were rising nicely and we were able to see the heartbeat at 6 weeks via an internal ultrasound (by this point those visits with Wanda were becoming pretty regular for me).  We bought a bassinet, some outfits, and some maternity clothes.  At the 9 week mark I started having some light spotting.  I didn’t really think much of it, but a few days later it turned to red bleeding with small clots.  My OB/GYN got me into the clinic for an ultrasound that day.  I had my husband leave work to attend my appointment with me.

I got on the ultrasound table for yet another internal ultrasound.  I laid there for what felt like an eternity while my doctor searched across the screen with a concerned look on his face.  I could see the screen.  I am a healthcare professional and knew what a 9 week ultrasound should have looked like—mine was not that.  My OB/GYN said “Nicole, I am so sorry.” It was then that my entire world came crashing down around me.

I’ve heard the words “I’m so sorry” a lot in my life, but those words hit a little harder when it’s about the viability of your baby.

I’ve heard the words “I’m so sorry” a lot in my life, but those words hit harder when it is about the viability of your baby.

I sat there, rather numbly, as he explained whether I could choose to either have a D&C or take a medication called misoprostol.  The surgical option was going to be a few days and I couldn’t bare to wait that long, so I opted for the misoprostol.  One tablet vaginally and then more doses orally over the next day.

There is no way to prepare for the aftermath of misoprostol.  My OB/GYN told me that it would be like a heavy period and my bowels might be upset.  What I experienced were 8 hours of contractions stacked on top of each other.  It was the most excruciating pain I have ever felt (and I have now had two c-sections).  The contractions were a minute long each and two minutes apart.  I had no pain medication other than Tylenol.  My bowels were, what I would call, more than upset.  I didn’t know when the pain was going to end.  I barely remember most of it.  What I do remember is the moment when the embryo passed.  It had distinguishable fingers and legs.  I can still see the image of it in my head.  I sat hopeless as the meds sucked every bit of life and joy out of my body.

The pain seemed to ease a little once the embryo itself had passed, but the next few days were filled with waves of afterpains while my body continued to bleed.  I wish I had’ve known to advocate for better pain management for myself during this time.  Tylenol felt like a bad joke.

The months that followed were filled with depression.  I don’t remember most of it.  I don’t know how I managed to bring myself out of the darkness this season brought with it, but somehow I did.  I was only 24 at the time and could barely regulate my own emotions, so I just shut down.

I listened listlessly to people asking me what I did to cause it…how much I lifted, if I thought my weight had anything to do with it.  I endured the sting of statements telling me it happened for a reason, that at least it was early, and that at least I could get pregnant.  I watched the pregnancies of people close to me continue on while mine had failed.  I don’t know what would have comforted me at the time.  Looking back, I still can’t provide a solid answer to that.

We were able to do another four cycles of medication and I ended up conceiving our first son, Anderson, in December of 2016.  I quickly learned that pregnancy after loss is filled with all kinds of emotions.  I think jumping off a plane would’ve given me less anxiety than attending my ultrasounds.  I convinced myself at every ultrasound that the baby would be gone and had pre-planned the course of action I would take this time to handle my miscarriage.

I started sharing about my miscarriage on social media and was so surprised to be met with so many stories from friends and family who had gone through the same thing.  It was so nice to feel seen and understood in my healing journey.

I was so surprised to be met with so many stories from friends and family who had gone through the same thing.  It was so nice to feel seen and understood in my healing journey. We delivered Anderson via c-section in July of 2018.  We had actually gone in to be induced, but when we arrived for our appointment his heart rate was too high.  I was taken in for a c-section immediately before they even started the induction process.  His cord was wrapped so tightly around his neck that it was drastically affecting both of our vitals.  I am so thankful I agreed to be induced, otherwise this would’ve gone unnoticed and he might not have survived.

At the 6 week mark postpartum, my OB/GYN advised us that we could start trying to conceive again.  I thought it would be easy.  I was under the impression that my hormones might reset themselves after I had Anderson.  Months and months went by, each bringing with it many negative tests and more waves of grief.  I wasn’t taking care of myself and reached a really low point for my mental health and body image.

It was around this time that I really made a change in my self-discovery journey and decided I was done hating my body, both for its size and its inability to fall pregnant on its own.

A Journey of Self-Love

It was around this time that I really made a change in my self-discovery journey and decided I was done hating my body, both for its size and its inability to fall pregnant on its own.  I dove head first into a self-acceptance and self-love journey that I documented in its entirety on my Instagram page.  I really started to treat my body like I loved it and began the healing process with my relationship with food and exercise (I have a past with disordered eating and exercise).

As the pandemic took over the world, I really had a chance to take care of myself.  We decided to stop tracking my cycle for awhile—but kept trying—until numbers decreased.  Once the situation started to look a little better, we started actually trying again and found out we were pregnant just a few days short of my son’s second birthday in July 2020.

In what I’ve been told was a pretty iconic moment, I very publicly shared that I was pregnant on my Instagram feed the day after we found out.  I am a firm believer that the 12 week-rule is useless and I know I would’ve wanted the support of my community if the pregnancy did result in a miscarriage.

I had some spotting in this pregnancy and, once again, convinced myself that this pregnancy wasn’t going to be viable.  I thought It was all too good to be true.  It’s all a big joke that we waited until numbers dropped to track my cycles again, because I ended up delivering our second son, Hennessy, during the height of the third wave here in Ontario.  He was also delivered via c-section, which was supposed to be scheduled but my water broke 20 hours before we were supposed to go in.

We finally have the family we always dreamed of and are officially finished this chapter, though it will always be a significant part of our book.

We finally have the family we always dreamed of and are officially finished this chapter, though it will always be a significant part of our book. My biggest advice for families going through miscarriage is to share your story, however that looks for you.  Whether you tell one person or an entire platform, it is so healing to tell your story.  I am so thankful that it has become more commonplace to share our stories so we don’t have to sit in silence like previous generations did. 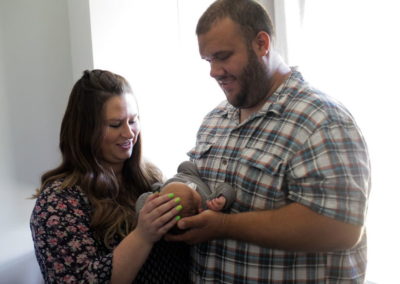 I had one miscarriage and two live births. I was 25 and 28 for my live births.  My firstborn was conceived with monitored and medicated cycles.  My second born was natural after 2 years of trying.

I wish I had have set more boundaries with friends and family.

I think it was probably an issue with chromosomes or something as the fetus was developing.

Share your story.  You never know who could be there to support you.  You don’t have to share it on a big platform, just talk to a friend or share in a way that is meaningful for your recovery.